On April 25, 2020, Fierce Autistics and Allies protested a kickoff event for Autism Speaks. It was "Steps for Kindness." This was a virtual walk to fundraise for the corporation.

The turn out was more than anything we could ask for and I want to thank you all personally for it. The protest was a major success but there was one turn of events that left a sour note.

An active board member of our organization received a private message from the husband of an Autism Speaks executive, Lisa Goring. Paul Goring sent my board member a very unprofessional and inappropriate message on Facebook for speaking out in accordance with our mission statement.

I was shocked such a thing would be sent to anyone, let alone an Autistic person speaking for their rights. I then emailed Autism Speaks. 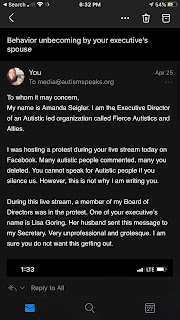 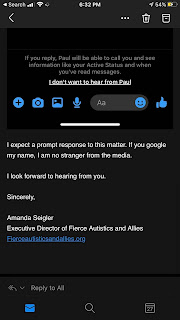 Shortly after emailing, I received an email from his wife: 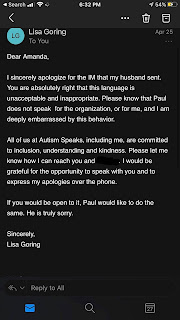 This executive does say that Autism Speaks stands for inclusion but we all know how false that is. It looks like the executive is trying to save face. Autism Speaks says they are for inclusion but they are still trying to find a cause to us. She wants to speak with us over the phone but a large number of Autistic people have a hard time with the phone. Not very inclusive, is it?

Today I received an email from the husband. 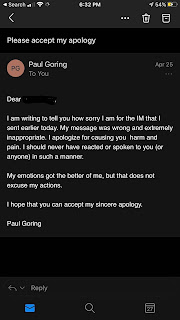 After receiving these emails, they do not seem genuine. There is an extra space between "you" and "harm." This tells me that there was an adjective between those words. This email was about his apology not about what he did. This apology was not sent until prompted. The organization wants this situation over with.

Professional collaboration between federal non for profit organizations guarantees the safety of all members involved. Given the breakdown between Autism Speaks and FAA, the resulting sexual harassment will be handled by the organization representing the victim.

There is no "war" or "teams" in initiative toward humane and ethical treatment of Autistic people, and the research pertaining to the disability of autism.  This is the only way the Autism community and the Autistic community can work together.

The impact of this malfeasance can only be evaluated by multiplying its potential to cause the same harm to 3.5 million Autistic Americans who do not have direct access to an Executive Director of a national non profit issuing a public statement on their behalf.

Official Statement About MMS Being Banned in the United States